Accusations of police brutality, a young, unarmed black man dead at the hands of a white officer, followed by days of riots, looting, violence and reports of racial unrest, sounds like Ferguson, Missouri today. Unfortunately stories like this go all the way back to the beginning of American history. Black suspects are four times more likely to be killed by police than whites. Black citizens often feel alienated and persecuted by primarily white police departments. There are important lessons to learn from Ferguson. I’ll share a few ideas that come from our Conflict Management Program.

The Unrest at Ferguson Was Predictable

1. The black community already felt anger and distrust toward the police department and this primed the pump for a poor reaction if the Grand Jury came back with no charges against officer Darren Wilson.

2. Looting and burning happened in the run-up to the grand jury decision therefore it’s predictable that violence would also occur after.

3. Pre-existing racial tensions and distrust create a climate where violence between races was likely to occur.

4. An absence of cooperation and coordination with community groups, dispute resolution, and community outreach efforts created a leadership vacuum leaving citizens feeling alienated from the police and other town authorities, thus stoking fear and hostility.

An absence of leadership, community cooperation and community based policing fueled distrust in Ferguson. Good police officers seeking to keep the peace were at a disadvantage because the relationship with the community was broken. You can see this played out visually in photographs showing of a line of police in riot gear up against a group of angry citizens. Once people are divided and screaming, communication stops. People are then in a win-lose, competitive dynamic that can lead to more emotional and physical injury and no long-term strategy for cooperation and peace.

When leaders fail to recognize that a problem exists they won’t likely do anything to fix it. In August, Ferguson Major James Knowles, a white man, said “there’s not a racial divide,” in Ferguson. He went on to say,  “that is the perspective of all residents in our city absolutely.” If you don’t believe racial tensions exist then you won’t likely take seriously any warnings or concerns about pending conflict. Knowles falls into the pre-contemplative stage of change, according to a model of change created by researchers looking at how to get people to modify their behavior to lose weight or quit drinking. Pre-contemplative means you’re in denial. If you’re in denial you need an outside consultant to help you navigate in the dark.

Most conflict resolution experts see empathy as critical to successful management of disagreements. When you can put yourself, emotionally, in the other’s shoes, you learn what they need,  fear, and what they most care about. All of that information leads to understanding and fruitful points of connection. When it’s time to negotiate with someone, it helps to know what they need.  Did the police department of Ferguson effectively show that they empathized with the concerns of the black community? Did the black community effectively show concern for the needs of law enforcement? If they fail to talk, more social distance, fear and alienation will fill the vacuum created.

Police failed to collaborate with and understand the community they were charged with policing. Community leaders attempted to prevent violence and pave the way for peaceful protests following the grand jury decision. Montague Simmons, leader of the Don’t Shoot Coalition, joined with about 50 other community groups in an attempt to prevent violence and still give a voice to the suffering community. They expressed a concern that heavy-handed law enforcement tactics would amplify the rage.

Sometimes when people feel powerless they react with violence. As psychologist Rollo May writes, “As we make people powerless, we promote their violence rather than it’s control.” We all have a need to feel significant. Powerlessness undermines that and leads to corruption in an effort to establish some control over our lives. Ferguson protesters held signs saying, “Black lives matter,” and “(Governor) Nixon doesn’t care about black kids.” These signs suggest a cry for significance, for humane treatment. 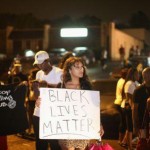 Volumes will likely be written about Ferguson and other similar cases that reveal cracks in our American system of justice. It also appears that Michael Brown’s behavior may have contributed to his death at the hands of a police officer. Parents can protect their children from much police brutality by teaching them to respond to police in a calm and respectful manner. Treating police like they are human beings too can make your experience less painful in most cases. Empathy should go both ways. Nevertheless, the police are held to a higher standard of judgement than 18 year old kids. Let’s hope Michael’s death leads to some greater wisdom, peace and understanding.